Mathieu Larose sent over a much shorter one-liner that installs Node in the docker container. This means my original Dockerfile step

The second piece of feedback was via Twitter from Darshan Shankar 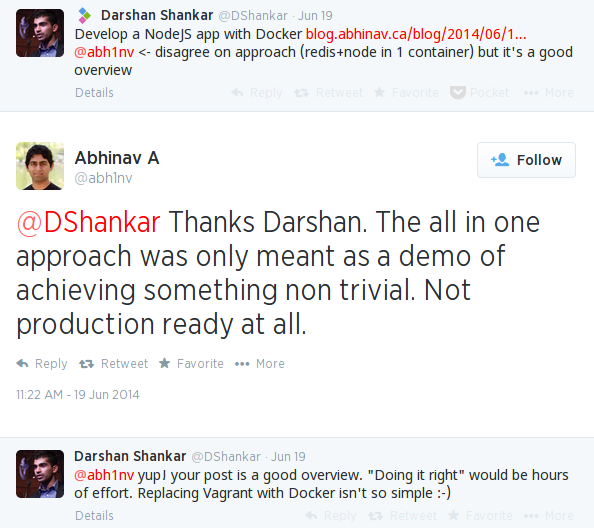 As I explained on Twitter and at the end of the previous post, having Redis and Node in the same container was meant only to demonstrate how Docker works to first-timers. It isn’t recommended as a production setup.

Since I’ve already agreed that having Redis and Node together is probably not the greatest idea, I’m going to take this opportunity to fix this mistake and demonstrate container linking at the same time.

The fundamental idea is to strive for single-purpose Docker containers and then compose them together to build more complex systems. This implies we need to rip out the Redis related bits from our old Dockerfile and run Redis in a Docker container by itself.

Redis in a Docker container

Now that we’ve decided to unbundle Redis, let’s run it in its own container. Fortunately, as is often the case with Docker, someone else has already done the hard work for us. Running Redis locally is as simple as:

You’ll notice the extra --name="myredis" parameter. We’ll use that in the next step to tell our app’s container about this Redis container.

The next step is to update our Dockerfile and exclude the Redis-related instructions.

Our app image can now be built with:

Once the build has completed, we can launch a container using the image. The command for launching an instance of this image also needs to be modified slightly:

I’ve also injected an environment variable called REDIS_HOST using the -e flag to tell our node app where to find the linked Redis.

Once the container is running, you can utilize the methods described in the previous post to install dependencies and get your server running.

I hope this provides a satisfactory demonstration of how linked containers can be used to compose single-purpose docker containers into a more complex working system.